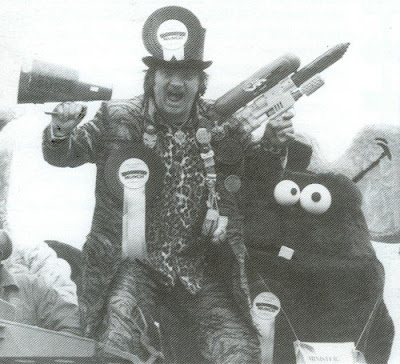 This doesn’t refer directly to a piece of Monster Munch merchandise so think of this as an additional piece of Monster Munch trivia relating to my previous post about The ‘new’ Monster Munch Monsters from 1995- 2008 and their past. While researching into the life of David “Screaming Lord” Sutch  (1940 –1999)  the founder of the Official Monster Raving Loony Party for another project (found here on my main site). I discovered this image in his book ‘As Sutch, the political manifesto of the Official Monster Raving Loony Party’. Lord Sutch can be seen campaigning with the Monster Munch Monsters! Unfortunately no information is given about the photo apart from a caption underneath that reads, “The 12-ton armoured personnel carrier approach, 1995 –The Monster Munch”. Wanting to know what his Lordship’s connection to the Monster Munch brand was I contacted Walker’s Crisps but unfortunately this yielded no results. Then the answer was eventually presented to me through former long-standing member of the party and now founder of the Eccentric Party of Great Britain Lord Toby Jug and John Tempest, David Sutch's PR Man and Campaigns Officer. It seems that back in 1995 (the year Walker’s re-branded Monster Munch and launched its 'new' monsters) Walker’s sponsored the Official Monster Raving party and the proviso was that the party’s name be changed to The Monster Munch Raving Loony Party for that year and that Lord Sutch himself stand as a candidate for the Perth and Kinross by-election in 1995. He did and he won 586 votes! (Coming in fourth behind the SNP, Labour, Conservatives and the Liberal Democrats). So there you have it, Monster Munch was a political party for one year and I am delighted to finally have the answer and I extend my sincere thanks to Lord Toby Jug and John Tempest for their help in clearing up this mystery for me. Naturally being associated with Screaming Lord Sutch I knew the answer would make perfect sense….
Posted by Arfon Jones at 06:34 3 comments:

My second favourite monster- blue monster graced the front of my second favourite flavour, saucy flavour! Just like the previous pink monster beef flavour packet this too has no sell by date or bar code placing it (roughly) at around the early 80’s but I know its older than the previous pack because the
‘Monster Facts & Figures’ located on the back of the beef pack was part of their‘ new series’ this one doesn’t say that ergo it’s one of the first runs… This ‘Monster Facts & Figures’ features the Gargon! We learn that ‘The Gargons were monstrous females with huge teeth and sharp claws. Legend has it that the most famous of them was called Medusa. Medusa had hissing snakes instead of hair. Her face was so horrible that no living thing could look at her without being turned to stone. If they’d had a bag or two of Monster Munch to concentrate on, no one would have ever considered looking at Medusa’.

Not only is this one of the oldest item in my Monster Munch collection but it is also the earliest memory I have of the brand itself. The ‘classic’ pink monster design on the front of the packet and absence of a sell by date and bar code confirms what I already know, that this is from the early 1980’s. I say confirmed because I fondly remember my mother picking me up after school and buying me Monster Munch and as I would eat “the biggest snacks that pennies could buy” I would read the ‘Monster Facts & Figures’ located on the back of packs. Here we find The Catoblepas! Apparently, “This is a wild beast with a very heavy head. In fact, it was so heavy it could hardly carry it, which was just as well for everyone around. Anyone who looked into its eyes fell dead on the spot. We do feel sorry for it in some ways though, it’s probably never seen a bag of Monster Munch.”

Monster Munch seldom alerted consumers to the potential dangers of its monsters, making this an interesting curio from the past.
Do you remember Monster Facts & Figures? Post a comment below and share your memories!

© Arfon Jones 2015. All images are copyrighted throughout the world.
Posted by Arfon Jones at 11:12 3 comments: 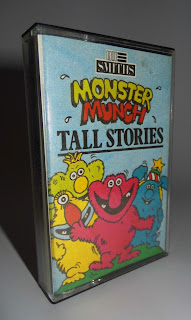 This cassette has been covered in the past by my good friend Paul’s wonderful ‘The Cobwebbed Room’ blog, but I felt it was about time I added mine to this page (apologies for the lack of updates by the way). Although I have had this tape in my collection for some years I have little to no information on it, and being a stickler for the details I held off posting until the information could be obtained. Sadly I am still none the wiser as to the details regarding the actual promotion but I have been most fortunate in tracking down one of the gentleman response for the actual production of it Mr. Andrew Howell who very kindly took the time to share his memories with me.

Monster Munch Tall Stories was a music and story cassette featuring the adventures of the monster Munch monsters produced back in 1984 by Nabisco Brands Smiths Division promo and were created by the V Team, the "V" Team comprised of Simon Byrne, Andrew Howell and Roger Bechirian. Simon Byrne and Andrew Howell had varied music careers and were brought together by producer Roger Bechirian (The Undertones and Elvis Costello) Simon being the singer and lyricist and Andrew specialising in the writing of the music. The team had been working on Simon’s debut solo album Dream Crazy for Epic records in New York while Roger Bechirian formed a production company called Vinyltone. A friend of Simon was working at the advertising company, which handled the Smiths (crisps) account, and being a big fan of Dream Crazy she asked Simon if he would be interested in the Monster Munch tape. The team agreed (however they adopted the pseudonym "V" team for the project) and work began in November 1984 starting with the stories scripted by KLP. The songs were to be based on the story lines so Simon and Andrew set to work on writing the songs with Simon focusing on the lyrics and Andrew on the music. The demos were recorded at Andrew's studio in South East London and once finalised they were mastered at Ampro studios in Shepherds Bush with Roger as producer. Simon explained, “Right from the offset, we decided to make this a high quality project. Although it was mainly for children, it had to be good. We were able to approach the songs from a place of freedom and imagination without the pressure of major record label involvement and to this day remains one of the most enjoyable projects we've ever worked on. This was amplified by being asked to do the narration as well.”
The songs were influenced by the music of the day and a keen ear will detect the similarities between  Purple Safari and Visage's Fade to Grey. Fun was had creating characters and effects and as Simon pointed out, “Tall Stories was no thrown together affair. Like so many creative projects, a little piece of the creators exists within it” and the entire project was completed by December.

After the release of Tall Stories Simon and Andrew went on to write Heart and Soul for the Monkees’s 1987 reunion album Pool It! Time marched on and Andrew now lives in Somerset and Simon in Canada but two years ago they started writing together again. With regards to Tall Stories sadly the master tapes no longer exist but Simon kept all his original lyric sheets and they can be seen on his site. Digitised version of the cassette has been uploaded as a mp3s to Oneplaceproject.com and links to them can also be found on his site. They have been incredibly popular offering great nostalgia for those that remembered them the first time around much to Simon delight who said he was pleased that people continue to enjoy the songs and stories once again, as that was what they had always wanted. Once again, my sincere thanks to Andrew for his time and the additional information on this marvellous tape be sure to check out the links to his work and either relive the past or discover Monster Munch Tall Stories for the first time, you will not regret it. 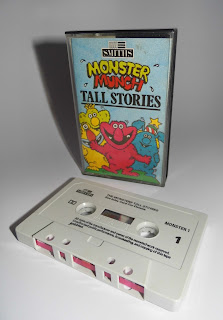 If you can provide any further information on the actual promotion itself, ether leave a comment below or e-mail direct arfon@arfon.net 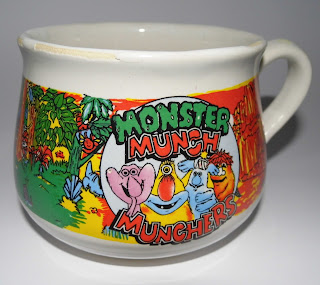 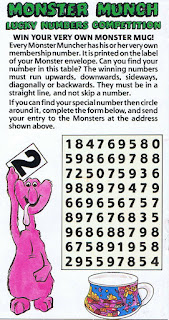 © Arfon Jones 2015 All images are copyrighted throughout the world. 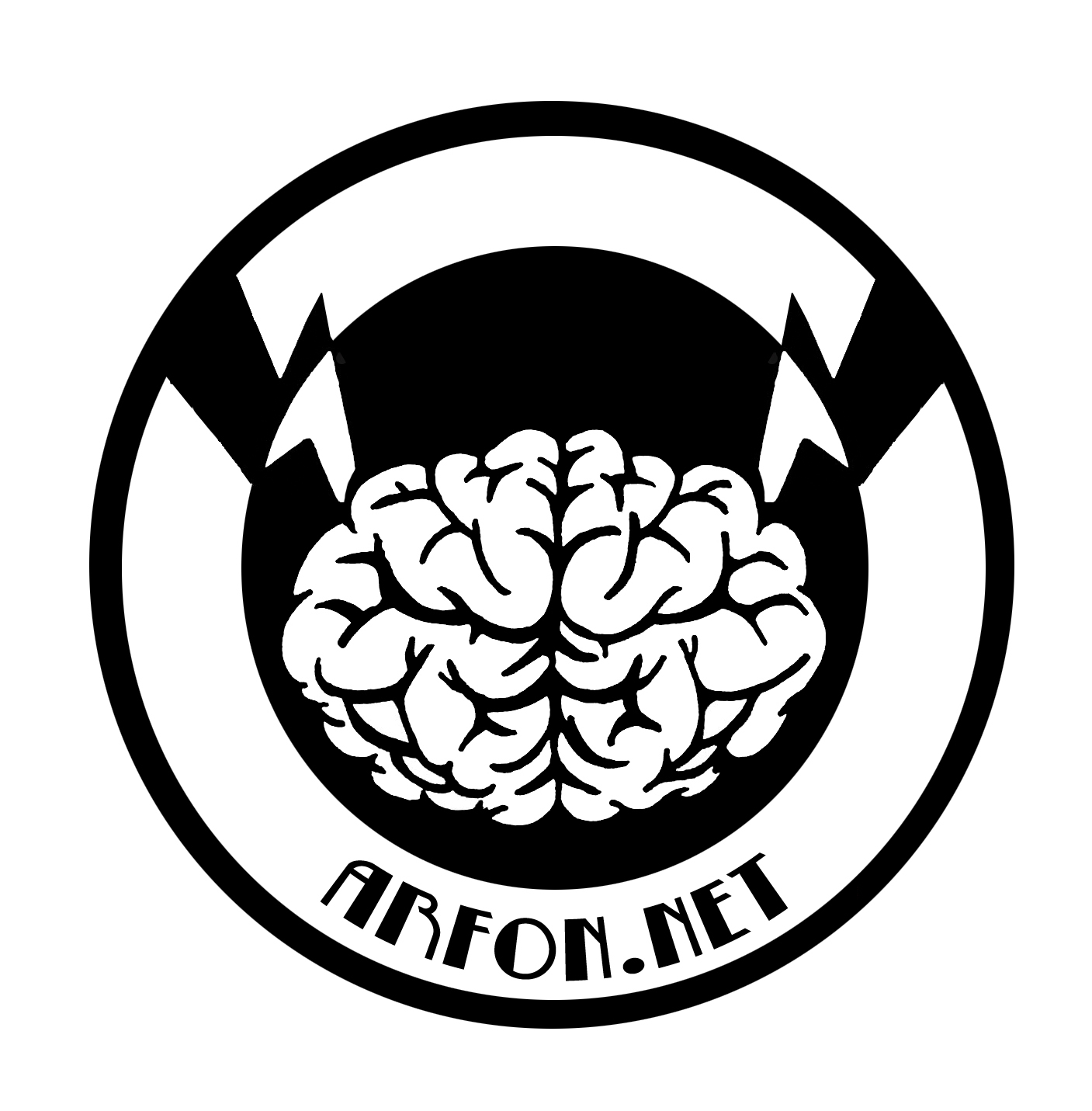